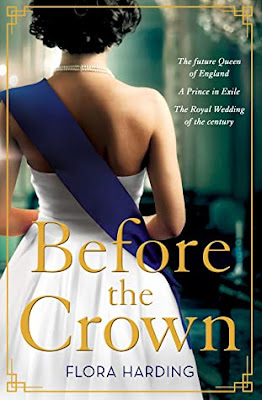 I enjoy historical fiction and was excited at the opportunity to read Before the Crown, by Flora Harding.  This book tells a fictional account of Princess Elizabeth and Prince Philip’s relationship before they married and before she became queen.  I found this book very interesting and had to remind myself it’s a fictional account, but it seems that the author did include historical facts and events.

The story begins in 1943, Elizabeth is 17 years old, and she and her sister Margaret are doing a play at Windsor Castle.  Elizabeth is peeking out from behind the curtains to see if Prince Philip is in the audience.  She has a crush on the Prince and is hoping to see him again.  The story covers the next four years of their relationship.  Was it love and romance?  Or was it a practical arranged marriage between royalty to form alliances?

I found the story interesting, especially contemplating what a young woman’s life would be like as a princess.  In many respects, as the heir apparent, her life and choices were not her own.  I’m curious to know if this fictional account captured what Elizabeth’s personality was like.  The character had a solemnity about her because of the responsibilities that she would take on in the future.  Philip was quite a contrast to Elizabeth.  Though older the character came off as somewhat immature and irresponsible.  He was pressured by family to think practically about his future and opportunities and he wavered between that and desire for freedom and to live his life how he wanted to live it.

The book started out a little slow but picked up midway.  With each scene, I got to know a little bit more about Elizabeth and Philip.  Her father, King George, was an imposing character but you don’t really get to know him apart from his interaction with Elizabeth and Philip.  It was interesting to see their lives against the backdrop of WWII and the years after the war.

I liked Before the Crown and found this book very interesting.  I wish that the author had included information about what was true and taken from facts and information versus what was fictional.  There is some profanity in this novel.  This book makes me want to read a biography about Queen Elizabeth and get insight into this woman who has been an influential figure for 58 years.

What I liked best about Before the Crown is that it made me think about what it must be like to come from royalty and have great responsibilities thrust upon you.  I came away with a new respect for Queen Elizabeth.  While reading Before the Crown, I found online pictures of Queen Elizabeth as a young girl from Town & Country Magazine.  It was fascinating to see pictures of Elizabeth in connection with this historical fiction account.

I found Before the Crown, by Flora Harding, very interesting and enjoyed reading it.  If you like historical fiction, romance, or have an interest in royalty you may want to read this book.

I would like to thank publisher One More Chapter and NetGalley for an opportunity to read Before the Crown by Flora Harding.  I was provided a complimentary copy of the E-book and was under no obligation to give a favorable review.

I enjoy historical fiction and was excited at the opportunity to read Before the Crown , by Flora Harding .  This book tells a fictional acc...