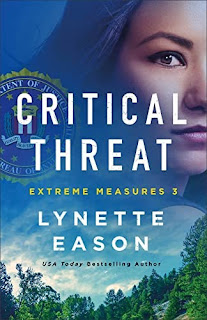 Critical Threat is Lynette Eason’s third book in the Extreme Measures series.  I enjoy suspense and intrigue novels and looked forward to reading this new release.

It appears that there may be a serial killer loose in Virginia.  FBI Special Agent and behavioral analyst Grace Billingsley and prison psychiatrist Sam Monroe team up to help the Critical Incidence Response Group to find this murderer before he takes the life of another innocent person.  Details of the case have been withheld from the public.  But when a prisoner has information about the crimes, Sam and the team want to find out what he knows and if he is involved.  Sam brings a unique perspective to the case because his father is a convicted serial killer and was recently transferred to the same facility where Sam works.

The serial killer aspect of this story makes the novel rather dark.  It was interesting trying to understand how the team puts together a profile of the murderer.  I liked the interaction between Grace and Sam.  Grace was not put off by Sam’s family background.  She was compassionate and caring towards him.

What I found off-putting about the story was Grace.  She was a brave woman, but didn’t use a lot of wisdom or common sense.  After the killer sees her at a crime scene, he repeatedly tries to get to Grace.  Though she has been targeted and has some protection, she makes several poor decisions, making her vulnerable to attack.  The folks that were providing protection did a poor job, because multiple times the killer was successful in getting to Grace.

When a character repeatedly puts themselves at risk and fails to use common sense, I stop caring about them because the story feels manipulating.  I would rather someone be smart over being brave.

Both Grace and Sam had family issues going during the height of the case.  To some degree it gave the reader a better understanding about the characters.  It may have taken away from the main storyline.

There wasn’t a lot of the Christian faith included in the novel.  Grace’s attempt to help Sam’s daughter understand about good and evil fell short.  Her explanation about the devil and sin seemed more filled with human psychology, rather than sound theology about a sovereign and holy God and sin and repentance.

The storyline was interesting, had a lot of suspense and intrigue.  It was also dark and disturbing.  At times, the story seemed drawn out and repetitive.  Grace putting herself at risk, over-and-over again, didn’t seem realistic.  Nor did the FBI failing to protect a target.

I enjoy Lynette Eason’s suspense novels, yet Critical Threat wasn’t my favorite.  Would I recommend it?  If you like Lynette Eason’s writing, you may want to give it a try.

I would like to thank Revell Publishing and NetGalley for the opportunity to read a complimentary copy of Critical Threat by Lynette Eason.  I was under no obligation to give a favorable review.

Author Wanda E. Brunstetter has become one of my favorite writers.   I appreciate that her books are clean, without profanity and sexual ... 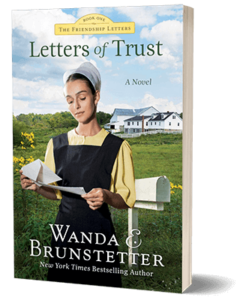