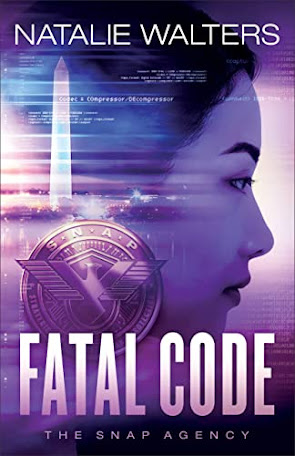 Since I love reading mystery and suspense novels, I was excited at the opportunity to read Fatal Code by Natalie Walters.  This is the second book in the Strategic Neutralization and Protection Agency (SNAP) series.  This author is new to me, and I haven’t read the first book in the series, Lights Out.

The book opens with Elinor Mitchell attending the funeral service for her beloved grandfather Arthur Conway.  He was a brilliant man, a theoretical physicist, and had worked at the Los Alamos National Lab.  More important than his career was the impact that he made on his granddaughter’s life.  He took Elinor in and raised her while her parents were involved with conservationist causes all around the world.  Elinor is also a scientist and is working on an important project at Lepley Dynamics.

Kekoa Young works for the SNAP Agency and is investigating a possible information leak at Lepley Dynamics.  Concerns have been raised that information has been shared with competitors or foreign governments.  Kekoa is a cyber security expert and was also assigned to keep an eye on his neighbor Elinor Mitchell.  That task that is outside his comfort zone.  Kekoa’s team at SNAP will also be part of the investigation.  Garcia, Lyla, Jack, and Brynn will be investigating other Lepley employees.

I enjoyed the story more as it focused on Elinor and Kekoa and their growing relationship.  Elinor was closed off and not open to friendship.  Later on, as she opened up, I grew to like the character.  Kekoa was my favorite character.  He was kind, caring, fun, thoughtful, smart, and a diligent worker.  Both Elinor and Kekoa are struggling with their own hurts.  Will they work through those hurts or choose to remain insulated?

I enjoyed the intrigue and mystery and trying to figure out who the bad guys were and why they were involved in trying to steal sensitive information.  Faith was a part of the storyline and it was impactful to Elinor and Kekoa’s lives.  I would like to have seen the Christian faith and Gospel also included.

Toward the end of the book, one of the bad guys threatens a character by describing the torture she will endure.  That seemed over the top especially coming from a Christian book publisher.  It would have been beneficial to have a key or list of characters at the beginning of the book with a brief description.  There are a lot of characters in the book and it’s hard to keep track of them.

I enjoyed the mystery and intrigue in Fatal Code.  While some of the scientific information was over my head, I found cyber security and code-breaking interesting.  I enjoyed the developing relationship with Elinor and Kekoa and the ties that Kekoa has with his family back in Hawaii.  If you like mystery, suspense, and intrigue you may to read Fatal Code by Natalie Walters.

I would like to thank Revell Publishing and NetGalley for an opportunity to read Fatal Code by Natalie Walters.  I was under no obligation to give a favorable review.

Since I love reading mystery and suspense novels, I was excited at the opportunity to read Fatal Code by Natalie Walters .   This is the se...