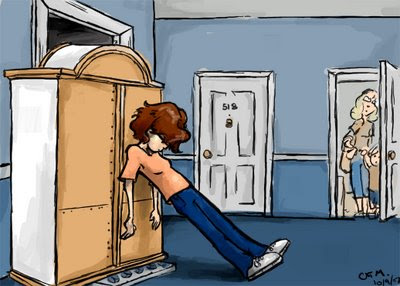 I don’t think that you can live in a place for so many years and not feel anything when you face the prospect of moving.

I’m feeling a multitude of emotions…exhaustion being primary. While there is a part of me that feels a little sad…more than anything I feel like the grace of the Lord has left this place…and it’s time to move on.

This afternoon the movers will be coming. After having lived here in Anaheim at an apartment on Jackson…I will be moving to a new place. This time…it won’t be just me, but my husband Chris and me will be moving. We will be taking up residence at an interim home just a few miles away.

Following our marriage, we quickly discovered that a one bedroom apartment is just a little too small for two people, two kitties and two birdies. Despite a lease that lasts until December…we decided it was time to move. Time to move to give us some additional space and to move into “our place”. Not try to live in a home that was Susan’s apartment or Chris’ condo…but our place.

For months now there has been nothing but issue after issue going on the apartment complex I live in. Starting back in April…it started with a notice that everything…EVERYTHING…had to be off the patios because they would be steam cleaning them. Thus…for a time I had plants and lots of patio stuff inside my apartment. It was just to be for a few days initially….but that few days grew into a couple of weeks…when the steam cleaning was pushed back. In the interim…I got rid of a lot of plants and patio decorations. They just didn’t look as good inside as out on the patio.

The pièce de résistance was the notice that appeared on my door…a couple of months before Chris and I were to wed. It notified me that they were doing major remodel on the apartment in the bathroom and kitchen. As it just so happens it took place the week following our marriage. Now that doesn’t sound too bad. But when we were using every bit of time to plan and execute a wedding in four months…the last thing we needed on top of our wedding as to have to empty the bathroom and kitchen completely. So in the weeks before we married…and even on the night before the big day…we were packing and throwing away things. Chris being the trooper that he is…didn’t protest at helping pack up a place he didn’t yet live. Instead…he helped box things up and made many a trip to the trash cans.

After Chris moved in…the quirks and problems with the apartment that I had just gotten used to…really, really bugged him. Like the bathroom door that wouldn’t close completely and the blinds that were broken and necessitate closing them by hand instead of pulling the levers. Oh…there was much more than that…but after living here for 10 years…well I guess I kind of got used to it all and it ceased to bug me. I just found a way to work around it.

For Chris one of the biggest irritations is the lack of parking. Sometimes he gets a spot close by…other times it’s down the street and by a sprinkler.

So…it was only a few weeks after we were married and back at home in the apartment that we decided…it was time to move. The search began for an interim place until we can purchase a home together. A tough prospect in light of today’s economy.

While it would have been nice to know God’s specific will regarding this change…it was with prayer that we began our search. The place we found…was by happenstance. It wasn’t one we had looked up on line. In spite of high rents at each place we went to…the rent was reasonable on the new place. We both liked it immediately…and felt comfortable there.

Each place has its challenges…even the new one. Like parking being the main issue. Despite promises that there would soon be many new open spaces in the coming weeks…that hasn’t happened yet. It looks like no matter what one of us will be parking some distance away. Perhaps God will use that to motivate us to keep moving in our search for the home when He will provide in the not too distant future.

As I’ve been taking my morning walks…I’ve been reflecting on all the changes in my life in the last 10 years…and thinking on what I will miss the most. Honestly…I think I will miss my morning walks in the surrounding neighborhood. I’ve come to know some of the people because I’ve seen them for so many years. I will miss my UPS driver who has delivered many a package…and he is so considerate that we’ve struck up a deal that since I’m usually at work when he delivers packages…he’ll just take them to the office and I can pick them up there. The other night…he delivered a package later in the evening…and even noticed that my name had changed. I told him I had just gotten married. If I had been thinking quicker…I would have given him one of the CD’s from our wedding. Oh well!

With so many problems that we’ve had here at this apartment since going back to April…I am so ready to leave this place. But I do feel a little something sad at leaving. My life has changed so very much, never more so than this year.

Just this year alone…I started dating Chris in February, my 16 year old kitty Nathan died, my mom was sick and died after 6 years of Alzheimer’s and I got engaged and married. It’s been an eventful year. While I wouldn’t change the things…I think I feel a bit melancholy at all that’s gone on in the last 10 years.

In some respects…I feel like the glory of the Lord has departed this place…and it’s time to move on. You’d think I’d miss a lot more things after living here for 10 years. But I don’t…at least not right now. It’s been a mix of both good and bad things. It’s been both eventful and life changing. Many people…family and friends have left my life in the intervening years.

The most important thing in the last ten years has been the presence of God in my life. My awareness, dependence and love for God has grown. While the prospect of a couple of moves is daunting…I know I don’t want to be outside of God’s will. I don’t want to try and remain in a place where God's grace has left. Instead I want to follow closely after His lead…hand in hand…step by step with my husband Chris.

Your prayers for our move would be greatly appreciated. Both this move today…and one in the not too distant future as we look for a home. We are prayerful that this move to a new home for the interim will be just right for our new lives together.

Email ThisBlogThis!Share to TwitterShare to FacebookShare to Pinterest
Labels: Glory of the Lord, God's Grace, God's Will, Moving

Since I loved JRR Tolkien’s The Hobbit and the Lord of the Rings trilogy books and movie adaptations I was excited to read a new biography T... 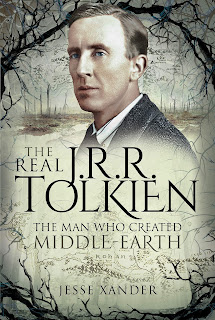